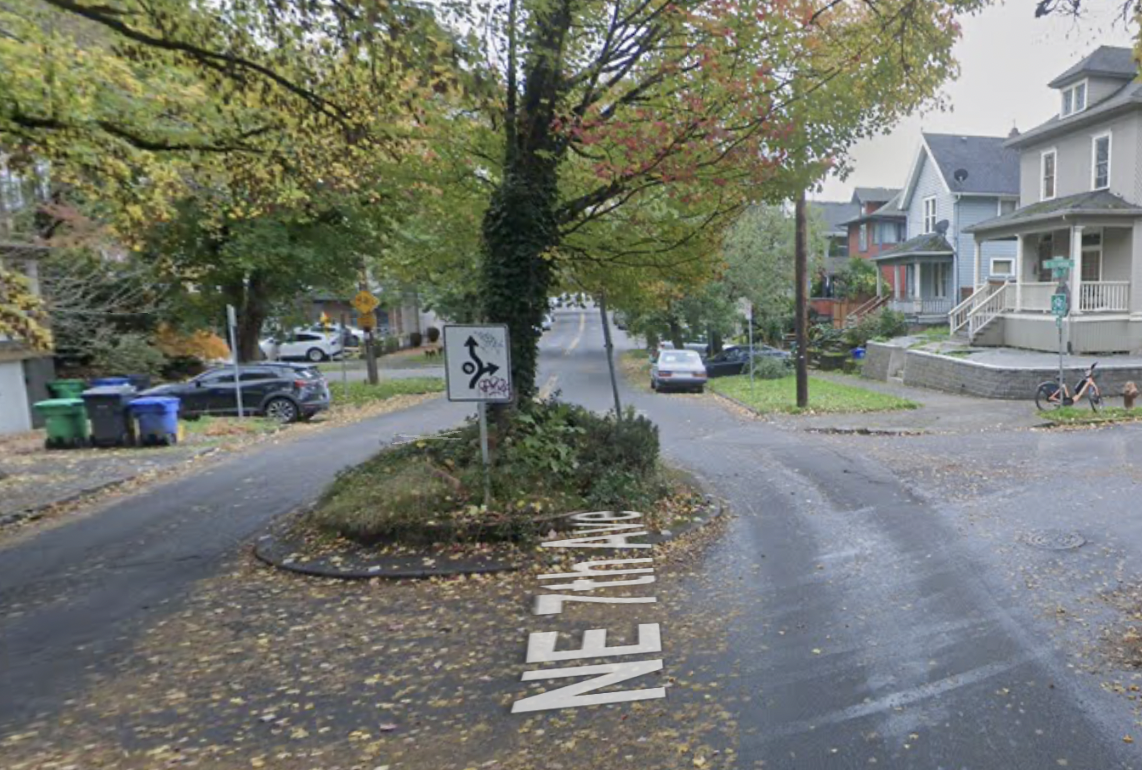 Say your goodbyes to the large tree and visitors circle at NE seventh and Tillamook as a result of the Metropolis of Portland is about to take away it.

The visitors circle is nice at calming visitors, nevertheless it additionally reduces visibility and sometimes creates surprising behaviors when folks minimize it the wrong-way and/or don’t adhere to correct yielding etiquette.

Tillamook can also be a well-liked east-west bike avenue and PBOT thinks eradicating the visitors circle from this offset jog with seventh will make the intersection much less disturbing. This mission’s additionally means the world surrounding the intersection will probably be closed to automotive visitors for 4-6 weeks.

That is a part of PBOT’s Lloyd-Woodlawn Neighborhood Greenway mission to “set up a low stress strolling and biking route” connecting neighborhoods in NE Portland to the Lloyd District and the Blumenauer Bridge (and every thing south of I-84). PBOT can also be engaged on a mission to make it safer to get to the Blumenauer Bridge through seventh from the south, which they are saying they’ll start building on later this month. They usually’ve already accomplished a Rose Lane mission at NE Sofa as one other established bike path to the brand new bridge.

Under are two extra views of what the seventh and Tillamook intersection seems to be like now at this time:

In keeping with a map PBOT launched with this mission announcement Thursday, they are going to set up a “two-way bicycle lane” on Tillamook one block east and west of this intersection. We aren’t clear if that’s simply in the course of the building zone or precisely what this can appear to be, however we’ll report again once we be taught extra.

The modifications at this intersection could appear small, nevertheless it’s essential to have as little friction as potential on this north-south hall. The town simply spent $19 million on this bridge, so folks want to have the ability to get there!

It will likely be attention-grabbing to see how folks reply to the intersection being closed to automotive visitors. Tillamook is a greenway, which ostensibly means it ought to be very low-car already, however this closure will give folks strolling, biking and rolling an opportunity to see what navigating the world is like once they don’t should keep away from automotive visitors. (Folks on Twitter are already calling on PBOT to make it carfree completely!)

Building on this mission will begin on Tuesday and go till subsequent month. Keep tuned for updates because the Blumenauer Bridge hall continues to unfold.

Taylor has been BikePortland’s workers author since November 2021. She has additionally written for Road Roots and Eugene Weekly. Contact her at [email protected]